I’m just going to throw this out there: I’m fighting feelings of disappointment in the Olympic men’s road race. I’ve thought about this all day, had an email back and forth with a friend about it, ranted to a coworker, and continued to mull over it while I did some weights at the gym. What’s bothering me you may ask?

Before you jump to the comments and tell me how stupid I am, here’s a few things I “get”:

Here’s the thing: I don’t care. IT’S THE OLYMPICS. At least finish it, you know? That’s all I’m asking. And how many guys from domestic teams back home would have loved to be there?

And now for some positives:

So am I irrationally annoyed with this race? Please do attempt to make feel better about it.

My non-Intel iBook is apparently not cool enough to watch the streaming video coverage of the Olympic cycling events. 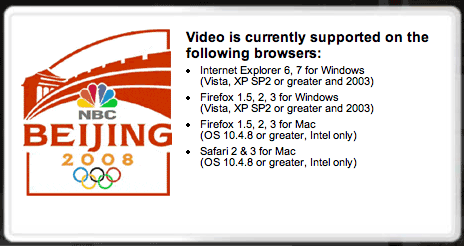 Now this just ticks me off. Chances are good it would still work on my system, but I’m being specifically screened. That’s annoying. And that’s bad form NBC.

Update: A little research tells me that they require Silverlight 2 for the streaming video.  Unfortunately Silverlight 2 doesn’t support PPC Macs, and, thus, no video for me.  Jerks.

I think my body is taking a hard line “no volleyball” stance. Biking is friendly to my joints, whereas volleyball gives me the gait of a 70 year old knee replacement candidate (ah, hello future). I currently must play volleyball with two ankle braces and a knee brace — all braced injuries are volleyball injuries, the most recent of which was a partially torn MCL in summer league outdoor volleyball in June. I also managed to tweak my back playing last week. That tweak has gotten consistently worse over the last week and now I can make no sudden movements.

I should really quit playing volleyball.

Anyone know a good massage therapist/chiropractor/PT?

Also, the Copper Triangle photoset is up on flickr. You can thank my useless back for the quick photo turnaround. My bracket is officially done now, reduced to a conglomeration of red strikeouts. If you look closely, you’ll see that I managed to correctly pick only 8 of the sweet sixteen teams, 3 of the elite eight teams and no final four teams. Of the teams I picked to play in the championship, one lost in the round of 32 and the other in the round of 16.

Next year I’m using the reliable coin flip to fill out my bracket. It couldn’t turn out any worse. Also, to the Missouri Valley Conference, I understand I should have given you more respect. But to totally ruin my bracket to show your anger? That seems completely unnecessary.

Oh, yes. It’s that time of year again. I cannot well describe the excitement this time of year brings for me — we won’t bring up the loss of productivity as I continuously refresh ESPN’s scoreboard during the day. In college, I missed very few classes, and most of these absences can be attributed to March Madness. My brackets are complete and ready for the complete desecration that shall ensue. I have fantasy entries at both ESPN and Newsvine. If you’re looking to join in the national crapshoot, feel free to join my ESPN group “Swanny Group.”

As my fair readers know, I’m not one to shy from a good bout of sports watching unless it’s hockey on TV or NASCAR. Thusly, I’ve been following the winter Olympics. I can’t help but peek at results through out the day only to go home at night to watch said results in full technicolor wonder. The first Olympics I remember are the 1992 Olympics (can the Albertville and Barcelona Olympics really have been 14 years ago?). As much as I would like to say I remember the ’84 or ’88 Olympics I don’t — I was 3 and 7 at those times. I love the Olympics and, as usual, have a few thoughts to throw into the mix (presented in bullet point format).

END_OF_DOCUMENT_TOKEN_TO_BE_REPLACED

The Divison II football team with the highest total offense per game, a top quarterback (a Harlan Hill candidate), an 8-2 record, a share of the North Central Conference title, and a #11 national ranking (or #8 depending on which poll you follow) will not be in the playoffs. Seems a little odd doesn’t it? I’m very bitter. Probably more so now than when I watched in astonishment as the playoff field was announced.

I know it comes down to USD being the victim of belonging to a tough conference and region (watch for someone from the Northwest region if not the NCC to take the national title), but, also, I fear, politics.

I’ve broken it down from every angle from who from the NCC should have really been in to, once at the regional level, examining wins vs. losses, strength of schedule, and conference equity. In the end, I come to one conclusion, we were still jacked.

There has to be something wrong with a system that leaves a #11 team sitting at home.
Do the DII playoffs expand to 32 teams? (But then, of course, team 33 is pissed)
Would a system in which four teams from each region are chosen plus 8 at-large bids be better?
What about a system that simply takes the top 24 ranked teams into the playoffs?

In the end no amount of digital yelling will change anything. But that doesn’t mean I’m not going to reserve the right to be bitter for some time yet. Congrats USD on a great season — I had fun following it.

We had some good times a few years ago. I would go to your games, you would play horribly, okay, or marginally well. Every once in a while you would pull a State win out of the hat to satiate your public. Yet, I would never go so far as to actually call your play excellent. Because, really, after Jamel graduated, it was pretty hit-or-miss. (I’m sorry, okay, but it’s the truth. We’re still friends, right?)

So, why is it you have to go and be all fabulous this year? Couldn’t you have done this a few years ago too? A 6-0 record, a 270ish passing efficiency rating for your quarterback (um, can you say “unheard of”?), 630 some odd yards of offense per game, and the highest scoring average in DII. Breaking my heart, you are. Where was all of this when I could actually see it?

Yeah, I know this doesn’t really change anything, but I felt the need to air out my feelings.

There’s really not much to say about today. Teams won, teams lost. My bracket is pretty much down for the count. What else is there to talk about?

The bright spot for the day was my pick of NC State over U Conn. It’s not much but it’s something. The low spot was that Wisconsin didn’t cream Bucknell as I would have preferred. They won, of course, just not by enough to satisfy my vindictive tendencies.