As I write this, the Copper Triangle start line is just over 24 hours away. This past weekend I did my last “big” training ride to keep the climbing legs nimble. In this area, “long” plus “climbing” usually means a trip up Rist Canyon. My route (similar to this) took me over Rist Canyon, through Stove Prairie, Buckhorn Canyon, and Masonville, and ended with a little extracurricular climbing on the dams and some bike path meandering for a grand total of about 60 miles. 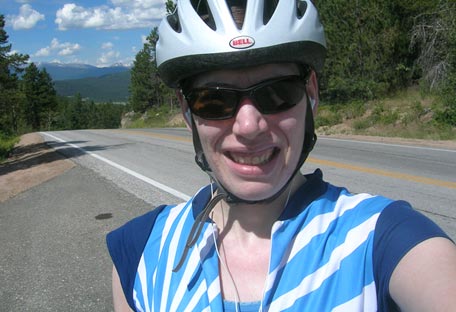 I must stop at the “summit” every time. This time I captured the moment.

I don’t think Rist ever gets easy only easier, but, there’s a definite satisfaction in the grind of many miles of constant climbing. And, even though I think I may be taller and weigh more than the average euro pro cyclist, I climb decently. I think that’s one of the best things I’ve gotten from all of the Copper Triangle training — discovering the lure of climbing and knowing that my body can do it for longer and longer distances.

And then I went barrelling down this. 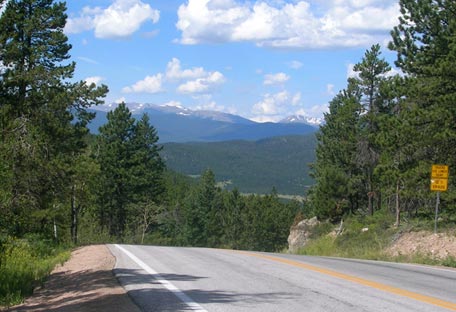 Where did the road go?

Notice the sign: 12% grade. With significant use of my brakes, I still hit 42mph. Yikes. As you can imagine, climbing what I call the “backside” of Rist isn’t any easier than the “frontside.” It’s only about 1 mile, but it is steep. I would like an inclinometer to take an official reading of some sections.

Oddly, though I was out on a Saturday morning on a very popular route, I saw very few other cyclists. Usually there’s at least a couple cyclists I can engage in a race they don’t know they’re having.

There’s really not much to note for the rest of the ride. I flew through Buckhorn to Masonville, and, without a headwind, the climb to Horsetooth Park and then up to the dams was fairly easy. That first south dam wall is always jarring, though, and especially after 40+ miles.

So, am I ready? I guess. After being worked up about the ride for the last couple weeks, this week I’ve found a sense of calm. I’m sure I’ll be nervous the morning of, but right now I’m excited to get out and tackle it.

My legs don’t like to stop once they’re climbing, but I’m going to try my best to capture some of what I see.