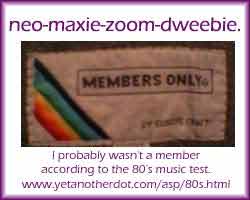 Take this quiz, then grow increasingly frustrated at the ones you miss. Insert slapping forehead and saying ‘I SOOO knew that.’

This sucks. I can almost hear the stampede of mice rushing to take shelter from the cold in our house. It became very evident when I found myself on a chair in the middle of the kitchen using a broom to take halting swings at one of the aforementioned rodents.

Hi. My name is Nicole Swan, and my cell phone number is eerily similar to the national number for the Marriott. I am asking that, in the future, you take greater care in dialing when you are trying to reach the Marriott. I do not take reservations, I cannot connect you to any rooms at the Marriott, and most of the time, I can’t understand you. Also, if you could refrain from misdialing the Marriott before 10 in the morning, it would be greatly appreciated.

Thanks in advance for your cooperation.

I have way too many shoes. This picture is only a portion of my shoes — and this is after I threw away four pairs and designated another eight pair to be given away, tossed, sold, whatever.

The official tally of shoes:

Is this too many? Let’s hear your tallies.

At best I now have marginal will to live after spending a greater part of last night on the daunting, tangled web that is Compaq Technical Support. Two hours worth of options and rerouting and an unknown number of countries later, I had been disconnected many times. Right when I was teetering on the fine line between sanity and insanity, Amir came on the line. Not wanting to be told that I would have to be transferred to yet another department to receive the superior service I deserve, I rambled off my problem, telling them it wasn’t hardware specific and I just wanted them to fix my AC port. I paused to take a much needed breath.

Well, Amir is liar, because it took about twenty minutes to get ahold of Josh — who from here on will be referred to as the ‘Compaq Savior.’ The ‘Compaq Savior’ double checked the serial number– which I now have memorized after reciting it forty times to thirty odd customer service reps– and my address, assessed my problem, and a box is now in the mail for me.

Now if I can just get rid of the twitch. Last night I polished off yet another episode of I Love the 80s Strikes Back. Ok, let’s not kid ourselves. It was two episodes — 1989 and 1980 — and I had already seen 1980 twice before. In an effort to find more worthless TV to consume, I came across VH1 Classic. I caught the end of a video that took me back to that time when I road the bus to school, we all wore stirrup pants, two different colors of scrunchy socks, and a baggy shirt tied in a ‘fashionable’ knot at the waist, and we, of course, listened to the leper of all boy bands — New Kids on the Block. I remember two distinct stages of the phenomenon that was NKOTB.

Stage 1
Like, Jordan is so HOOOTT. Hangin’ Tough is the best song ever. Turn up that Walkman.

This is the stage where loving New Kids on the Block is the cool thing to do. This is where one bought all the tapes, had a NKOTB bedspread, and even sported the shirt which looked quite snappy tied at the waist and paired with stirrup pants. Because I was a late 80s/early 90s child, I wouldn’t have missed this stage for the world.

This is the stage in which they became lepers of this boy band lovin’ society. When friends found your tapes, you lied — using an excuse such as ‘Ugh. My mom bought those for me and I didn’t want to hurt her feelings by throwing them away. I just keep them by the George Michael tape I’m not supposed to listen to’ to justify their existence. The girl that held onto her love of NKOTB was SO not cool. When Hangin’ Tough or The Right Stuff came on the ghettoblaster, you sang all the words, then looked awkwardly about to see if anyone had documented that you knew NKOTB song lyrics.

During this stage, somewhere around 1994, New Kids on the Block attempted to morph into NKOTB.

So, now, I’m waiting until 2010+ when VH1 can make I Heart the 90s Strikes Back: 1994 and document the unsuccessful rebirth of NKOTB. Other wonders I’m waiting to be docu-logged by VH1 are half-curled back half-curled down bangs, scrunchy socks, Spumoni clothing, and pants rolling.

Until then, I’ll have to settle for I Love 6 Months Ago.

Some of you may have noticed that I’ve been in somewhat of a distemperate mood lately. My last two posts were a little less than the congenial, witty banter you’ve grown accustomed to.

I’ve been in the proverbial dumps. This whole being-unemployed-wondering-why-I-tried-so-hard-in-college thing is keeping me down. It stems from a conversation I had on Wednesday that went a little like this (heavily paraphrased):

Me: Hi ______. How are you?
Her: Great. And how are you?
Me: I’m great. Thanks for asking. I was actually calling to check on the status of the position.
Her: Yes, of course. Um, we did decide to pick someone. We’re just in the process of checking references. *pause*
Me: *holding breath*
*don’t remember how she told me I didn’t get the job. Apparently a dissociative identity has emerged and I’m repressing the bad memory*
Me: OK.
Her: I will tell you that you were great, but you just didn’t have quite enough ‘real-world’ experience.
Me: *ouch. This hurts even coming from a really nice person.*

To make this painful story short, I ended up fifth on their list. FIFTH! For a job I thought was almost custom made for me and my work experience.

With hopes dashed and the optimism mercury dropping fast, I have fallen into a disappointment-induced stupor. I basically just feel like such a loser. I’m a 4.0 student with good work experience (for my age). Doesn’t matter. Apparently there are no jobs for one such as I. It sucks. A lot.

However, I’m fully aware that moping will not get me a job, so I applied for a position in Montana yesterday.

Bonus points to anyone who can pinpoint the source.